CHECK IT OUT – LUMINES

So I’ve been playing a lot of lumines lately, it’s become somewhat of an obsession. If you’re unaware of what lumines is, it’s a music puzzle game made by Tetsuya Mizuguchi (Rez, Tetris Effect) where you rotate 2x2 blocks to form squares, accompanied by music and sound effects. It’s quite entrancing when you properly get into a game, and some sessions can go for as long as an hour if you’re good enough!

There’s quite a lot of titles in the series and I’ll be going over some of the ones I’ve played and what I like about them, as well as taking a look at a couple of obscure mobile games in the series. Let’s start with... 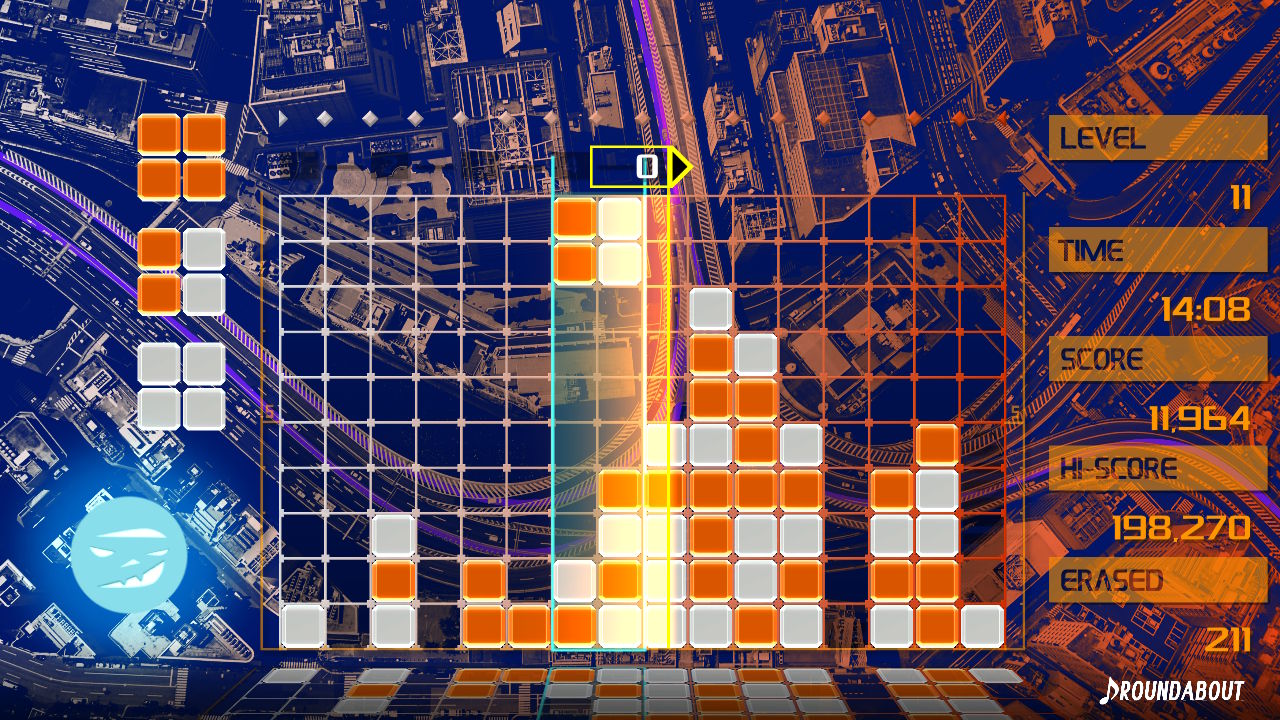 This is the one people probably know the most about, it’s received the most attention out of the whole series and has one of the most iconic openings in puzzle history, kicking off a 100 level journey with Mondo Grosso’s SHININ’. This first game is probably still the best game in the series, imo. Most of the skins are catchy and memorable, with maybe 1 or 2 duds in the whole game (i’m not really a fan of Aback, and a couple of the vs. CPU skins are pretty Eh).

However, there’s also the REMASTERED version of the game, which is the most accessible way for anyone to play Lumines right now. While this is a great version of the game, adding improvements from later entries in the series and extra modes, some of the redone themes are... worse? WORKING IN THE HOLE is hard to stare at with an increased amount of brightness, and some themes like TAKE A DOG OUT A WALK are just so cluttered and full now. It’s still amazing but i do wish they had kept closer to the originals here. Some notes about skins: – SHININ’ – If you don’t like SHININ’ you’re wrong – ROUNDABOUT – Great house banger – I FEEL THE MUSIC IN MY SOUL – This used to always be the point I would fail in a challenge run, the high speed of JUST... combined with the incredibly slow speed of this song is not a good combo. I can almost get to the end of the run now but all the songs at the end are slow moving scan lines with high drops speeds it’s so HARD – SISTER WALK – It was at the point of discovering this skin that I questioned Mizuguchi’s claim of the skins being themed around a party because who the fuck plays this at any party – TAKE A DOG OUT A WALK – haha omg wtf i’m on the weird side of lumines again – MEGURO – this is one of my favourite skins in the game but like. what in the fuck is it. also WHO PLAYS THIS AT A PARTY – GET UP AND GO – if anyone knows where to find the sax sample they use in this theme please let me know i NEED it 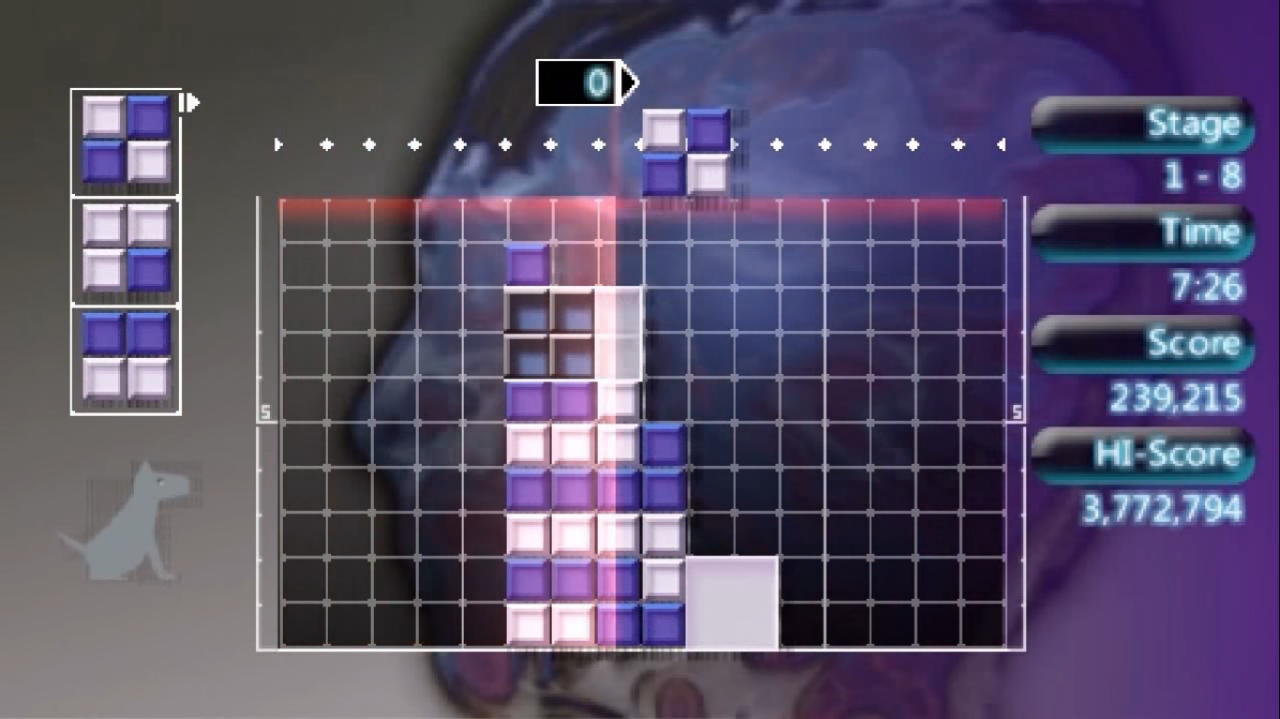 Lumines 2 improves the formula in uh... some ways, but feels like a downgrade in many others. There’s lots of new features here, but the big selling point is the new songs and skins included, alongside a selection of skins from the first game, now divided in 3 easier to manage courses rather than one extremely long course.

The main highlight of the new skins is LICENSED TRACKS from various artists like the Black Eyed Peas, Beck, Gwen Stefani, Genki Rockets, Ken Ishii, and more... or at least, they would be the highlight if most of them weren’t as flawed as they are in the game. These licensed tracks use their own music videos, many of which include skits or narrative scenes in the beginning or end – the unfortunate result of this is that the song usually ends up starting while the scan line is somewhere in the middle of the playfield, throwing everything off sync and making it harder to judge where the scan line is because you expect it to be following the song, when it’s not. Some songs have half beats in them that also throw the scan line off, and Missy Elliot’s track Lose Control switches to an entirely different BPM in the last section which isn’t accounted for at ALL.

Alongside this problem, because music videos serve as the backgrounds for these songs, there isn’t much theming going on, with the most ambitious attempt at theming a licensed song being Beck – Black Tambourine, themed around nice fancy typewriters and letters. Most other songs just use generic tiles.

The quality of the other new skins in this game vary as well, with some being great jams, and others just being... passable and not very interesting, with not a whole lot going on. [give examples]

Later Lumines games such as Live and Supernova would be a combination of features and skins from both the first and second game, with a few new ones thrown in. 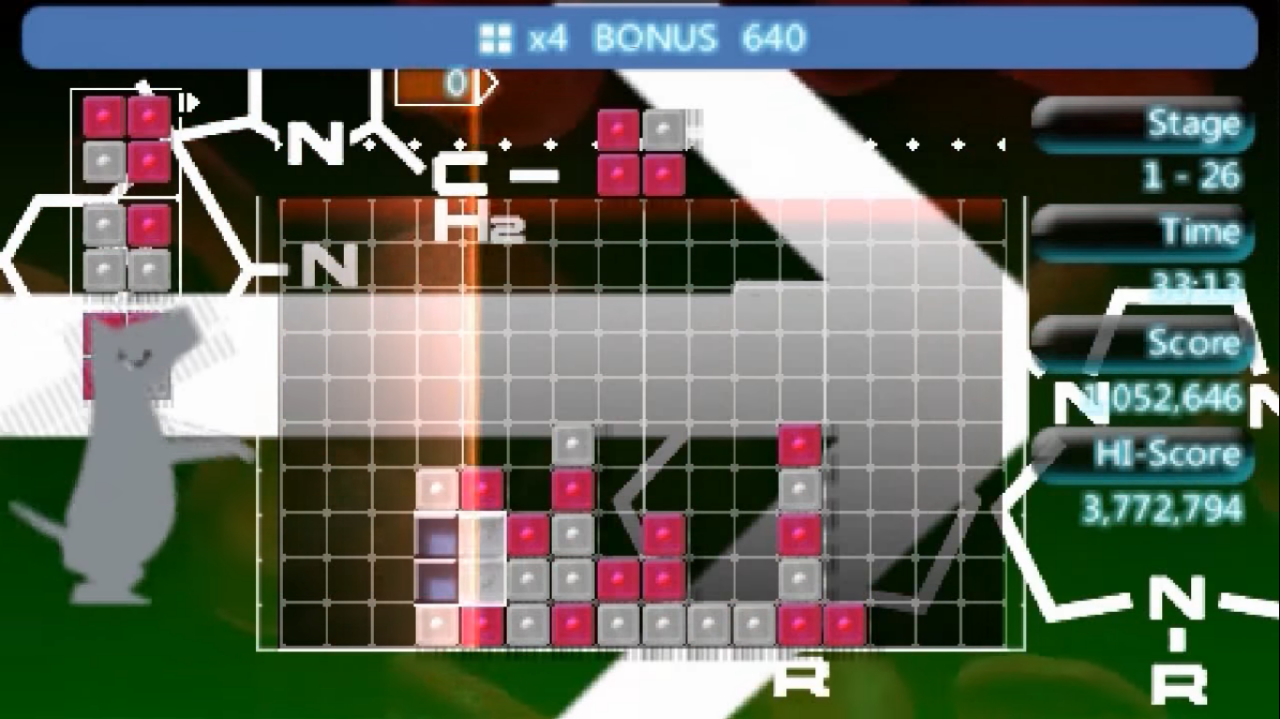 Some notes about skins: – BEAN JAM? – warioware type beat – STROLL AROUND THE WORLD – IMO this shouldve been the start of Class B, not Circles. This would’ve made a far more lasting impact. – KABUKI – possibly my favourite original skin in the game? goes hard af dude – STAR GUITAR – I think this is basically the only licensed song in the game that uh, Works Properly, and im glad they got this right at least because Star Guitar is an amazing tune. An ides of a Daft Punk themed Lumines game got thrown around once, but personally I think a Chemical Brothers themed Lumines game could be cool – FLY INTO THE SKY – Interestingly misspelt as “FLY INTO YHE SKY” ingame – THE MISSION TO THE MOON – actually no this is my favourite original skin in the game, i love this one – BAD BOY CENTURY – or maybe its this one. shit i cant decide – HEAVENLY STAR – PLEASE can someone over at Q Entertainment just release a HQ version of this song already it’s great – BLOOMY GIRLS – this one gives me a lot of PC Music vibes tbh ?? 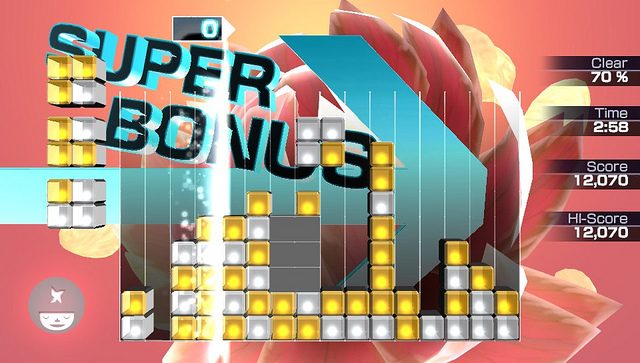 A very interesting iteration of the game, originally intended as a “reboot” of the series – in line with this, this game features NO content from previous games, everything is entirely new. In line with this, the game has somewhat of a loose theme of electronic music (house, dance, trance) resulting in a much more fluid experience compared to previous games, which would constantly jump genres.

The challenge mode in this game (now called Voyage) is made up entirely of licensed music, with the few original skins in the game relegated to bonus unlockables. It is a shame, I would’ve loved to see a combination of original and licensed content, but what we have here is an absolute blast to play through, with songs now moving through phases and sections depending on your progress, and plenty of surprises throughout (who the hell was expecting Windowlicker to ever appear in a Lumines game??). All the songs are pretty great cuts though the skins are sometimes unfitting and confusing (can someone PLEASE tell me what Played-A-Life has to do with a robot destroying a city, I need to know).

Avatars now also have powers, too – each avatar has a different one that can be used in a game to help you out, such as adding a Chain block to you next piece, or slowing the drop speed. And there’s even some new modes here to boot – a Master mode akin to Tetris TGM where blocks get faster and faster, and a World Block mode that everyone playing contributes to destroying for extra experience, which you use to unlock the avatars and bonus skins.

Sadly, the idea of “rebooting” the franchise wouldn’t quite last, and Lumines would go on to continue using its older skins with later titles in the series. It’s unlikely anything from this game will reappear in another title due to licensing issues, so it’s worth trying out if only for the completely different style it brings. 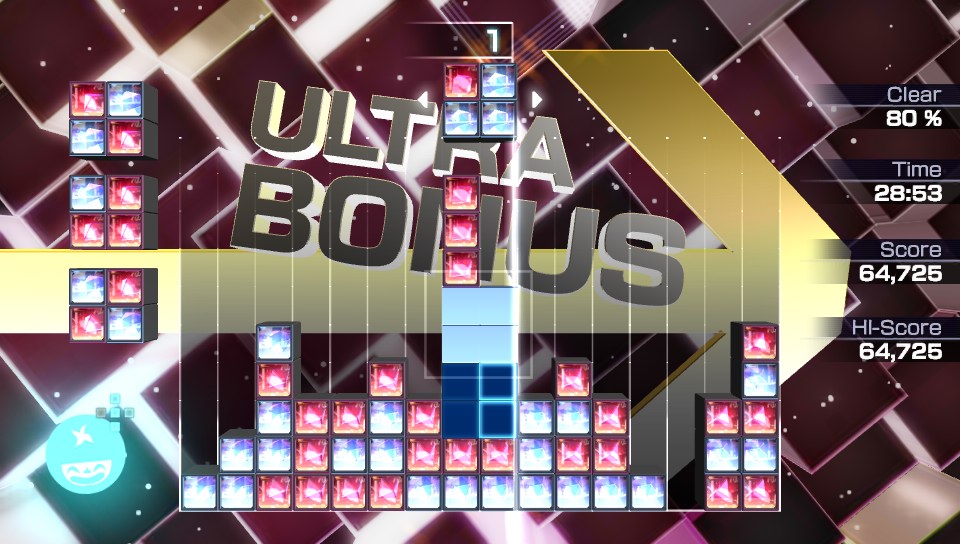 Some notes about skins: – YESTERDAY WHEN I WAS MAD – Yeah i wasn’t expecting a Pet Shop Boys remix from Disco 2 on here either but here we are and the theme is great tbh – BANG BANG BANG – I can’t ever get this one to loop properly to the next section and it’s both weird and infuriating. – EMBRACING THE FUTURE – this is just such a lush theme, i love it – WOODEN TOY – cutest theme in the game sound wise – WOLFGANG’S 5TH SYMPHONY – what an odd one to just.. throw in here. kind of the oddest song in the game, an electro remix of beethoven with a theme revolving around paint. – TRACES OF THE PAST – a pretty neat halloween theme actually, with tiles of lit and unlit windows. 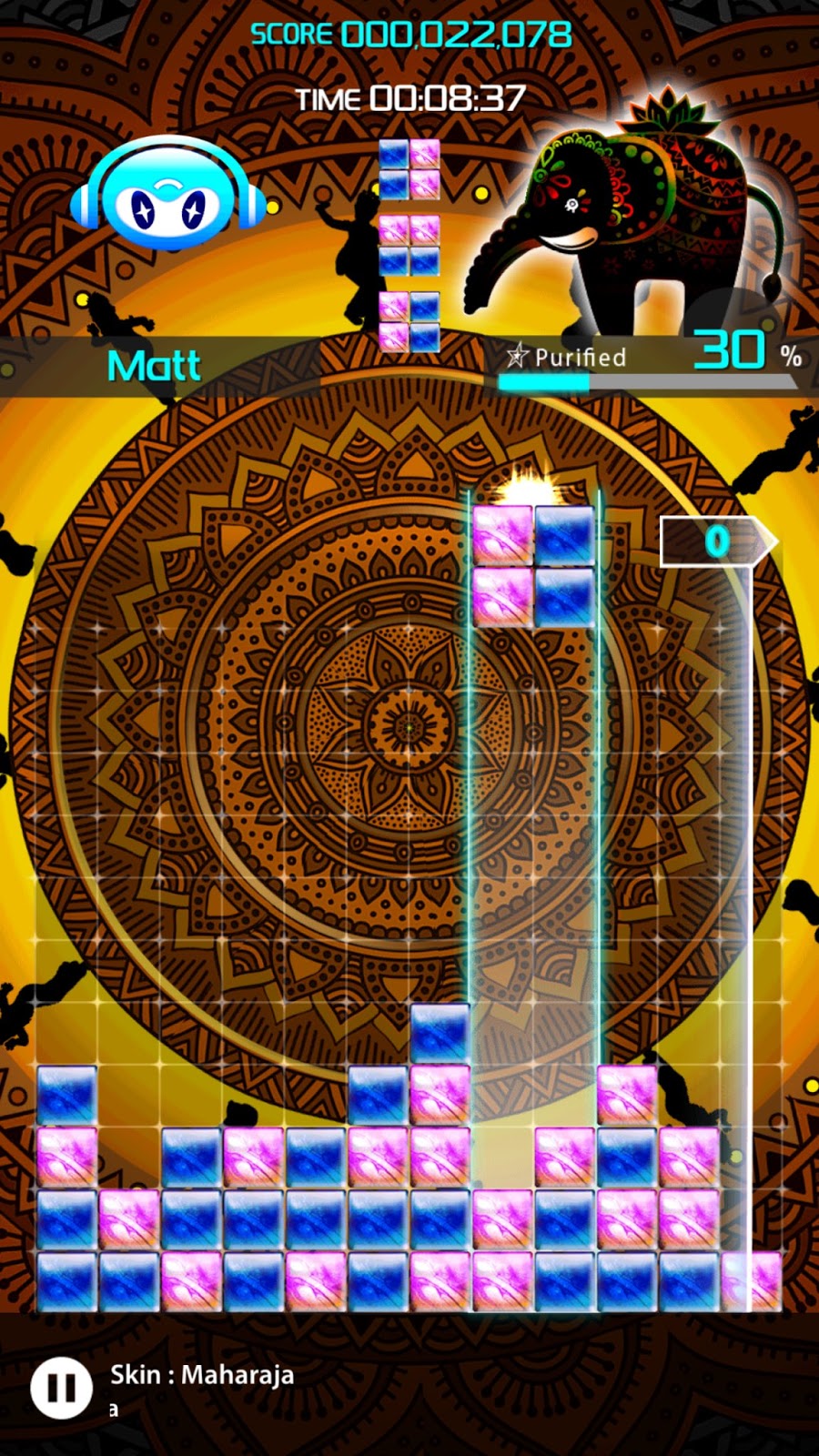 Ohhh, how i wanted to like this one... this is a modern mobile port of the Lumines game featuring 8 new skins and a bunch of classic ones, and even some enticing DLC packs, like a series of skins based on Rez. There’s even a small storyline about purifying the avatars that you play as, what’s not to like? Answer: the controls.

I find the touch controls in this game are very finicky and hard to use. Too many times i would try to swipe in a direction and it would not register, or try to drop a block and it would rotate instead. It makes the game really hard to play and I often found myself either making too many mistakes or having to stop any combos i was trying to pull off. Not even Rez skins can soften this flaw.

There were also two mobile Lumines games released for... uh, mobile. Not smartphones, the little ones with numpads. 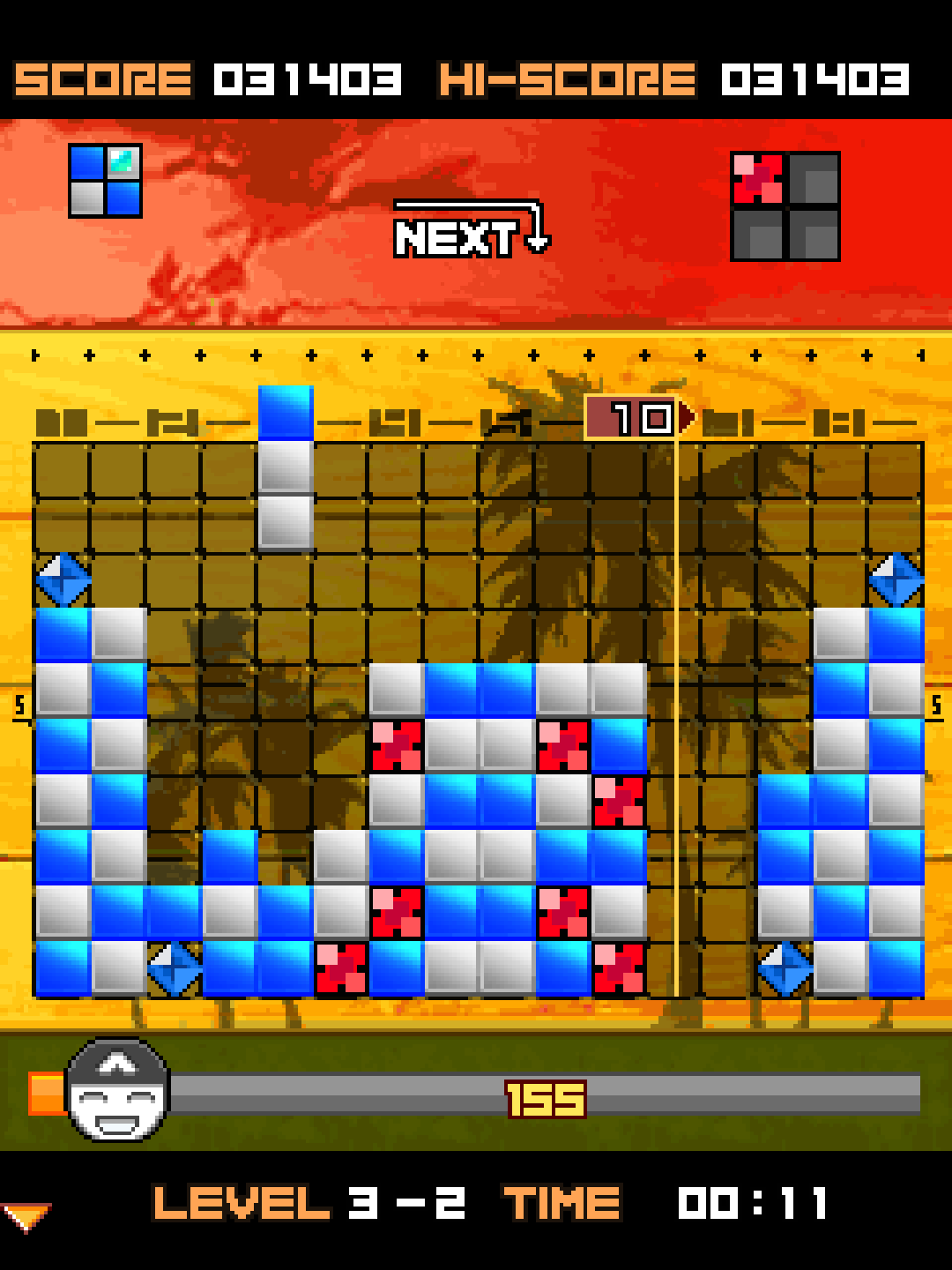 The first is Lumines: Block Challenge, published by Gamejolt, and it is such an interestingly weird version of Lumines. The controls are great and the MIDI recreations of tracks from the console game are very faithful and very cute, with some original tracks thrown in to boot. Where the weirdness starts is in the game’s “Arcade Mode”. Instead of the traditional “how far can you get” challenge (which is in this game, as a separate mode), each song is broken up into multiple stages with a set amount of blocks (not squares, blocks) to clear, and predetermined block maps to start with, with VS CPU stages acting as boss battles. If that wasn’t weird enough, this mode throws in entirely new blocks, such as a gem that can be matched with both block colors, or bombs that can remove chunks of blocks. It’s weird to play through but still very fun and good for short bursts of play (as a mobile game should be). 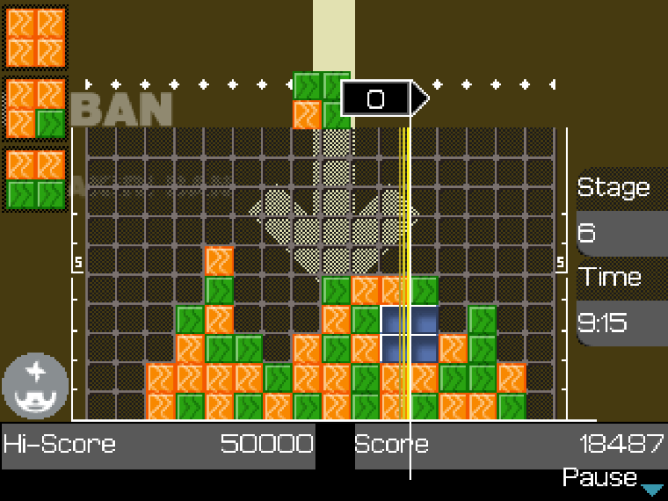 The second is less well known – Lumines: In The House Ibiza ‘10’s release is weird considering, a year prior, a version of Lumines for the iPhone was released, so why go back to java? I don’t have the answer to that, but what I can say is that this particular version of Lumines is... idk. The controls are fine, the gameplay is smooth, and the graphics are definitely an upgrade from Block Challenge, but the unfortunate flaw lies in the music itself. The 10 tracks included in this version are incredibly repetitive and quickly become grating to listen to, consisting of an 8 second loop repeated for about a minute. It makes the game an unenjoyable slog to play through.

...I don’t have a conclusion. I just wanted to gush about Lumines somewhere. If you're into puzzle games maybe try it ?? Please, Mizuguchi, make another Lumines game.